Is there such a thing as pregnancy induced ADD? If so I think I must have it because I'm not sure I've completed a project in the past 9 years. Today has been one of those days. I think I had 3 things on my to do list and didn't complete any of them.

I'd been nursing Elliott and was going to put him down for a nap when I found my front door wide open. I run outside to see Dakotta outside raking leaves in nothing but her diaper (and she probably wouldn't have had that on if it weren't for the duct tape). I wasn't sure if Corinna had followed her (more likely she led her) outside or not so I call for her in a panic. Luckily she was just barely to the side of the house and came running when I called. She at least had the good sense to put on a pair of patent leather church shoes on with her diaper before braving the cold wet Georgia weather. So after I pick my heart up off the ground I usher them in the house. Needless to say Elliott was no longer asleep so I dead bolted the front door and went to get him lulled back to sleep. After I get him settled in his crib I begin the process of getting the twins ready for their naps.

So about 45 minutes later I've finally gotten them all to sleep and realize I have less than an hour to get housework done without toddler help. So I quickly pick up the toys and throw them in the corner without really putting them away because getting the floor vacuumed is my top priority since a) I have a crawling baby and b)he screams when I vacuum when he's awake. Well before I can even get the all the living room vacuumed I hear crying. Elliott slept all of 45 minutes, apparent he doesn't like me even vaccuuming even when he's asleep and on a different floor. So I bring him down since he doesn't care for the vacuum decide to start putting the toys away. And I don't get far with that when my big girls start banging on the front door while of course is now dead bolted and they have to wait for me get the key to unlock it.

Kendall comes in and throws her bag at me and wants to immediately go back outside. I keep her in for all of 5 minutes to go over her day and to check to see if she has homework. Then she's off while I review Rebecca's school work. She and I talk a bit and play with Elliott and then I start back on my project of picking up toys. Well of course before I could finish I hear Kendall at the kitchen door. I go to see what's going on and her hands and shoes are covered in mud. So I make her strip and send her upstairs to the bathroom to change. Then I spend the next hour trying to get her shoes and jacket washed(which she needs for school tomorrow). And of course once all the mess is cleaned up it's time to start dinner and get the girl's homework done. Which of course leads to dinner and clean up and getting kids to bed and reading and before I knew it it's 9:00 and I realize the vacuum cleaner hasn't even been put up and the the toys I had started to clean up are already out again. And as I'm trying to write this post Kendall has come running all the way downstairs to tell us she needs to go potty (passing 2 bathrooms in the process) the twins woke up and needed to be retucked and now Rebecca is complaining of bad dreams. I guess I'll just add this post to my list of incomplete projects.
Posted by Melissa at 10:37 PM 2 comments:

So Corinna and Dakotta love the song Old MacDonald had a farm. I always stop when we get to the animal and wait for them to call out the name of a farm animal. Well at least that's the way suppose to go. A few days ago we were singing and they shout out "spider" (I guess it should have been expected since they'd watched Charlotte's Web earlier). I tried to distract them and started in on the chorus of "Moo, moo, mooos" but they weren't having it. I finally did some itsy bitsy spider hand motions and something about wiggling, that they seemed content with. Apparently they really got a kick out of my confusion so now it's become a big joke to them. They throw out kangaroo, giraffe, zebra and ballerina. Who knew Old MacDonald had his own little Utopia.

The title reminds me that Rebecca used to call the fast food restaurant O MacDonalds. I wonder if that has anything to do with her self proclaimed vegetarianism.
Posted by Melissa at 9:51 PM No comments:

How many things can 2 people find to fight over in one day?

There's the morning milk cups, poured at the same time with the same gallon of milk into sippy cups that to the untrained eye appear to be "identical."

Or the diapers. Yeah I know Luvs thought they were mixing it up by giving kids a new picture of Blue with every poop but those people didn't have 2 in diapers. Not so much a problem when my 8 year old with OCD tendencies is home because she actually seems to enjoy rifling through a stack of diapers to find 2 with the same picture. But I don't have the time nor the patience to put so much thought into something that will peed on within minutes.

Or the clothes. So for all of you that have relied on me dressing them differently (Kendall) the time has now come to learn to tell them apart.

Or the toys. Yes apparently it's not good enough to have a set of blocks but they each must have their own A block, B block, C block....

Or the towels their Aunt Victoria made them with their names embroidered on the hood. No matter how many times I've told Corinna that pink towel has Dakotta written on it she still insists is says Corinna.

Or the parent. It's not enough that each child is being carried (dressed, buckled, fed, tucked in) by A parent. It has to be a specific parent. (And I can guarantee the preferred parent will be the one that needs the help the most).

What's weird is there are a few things that they never seem to fight over. They have stuffed bears, a yellow one and a black one. Corinna always gets the black and Dakotta the yellow. Same thing with their blankets. And Corinna has come to accept that all Doodle Pads (Magnadoodles) are Dakotta's which is funny since only 1 is and the other 3 technically belong to each of her sisters, including Corinna. I will never figure them out. Oh well, off to break up another fight.
Posted by Melissa at 8:30 AM No comments:

Well I've been kind of busy and I forgot to post our pumpkin pictures. So here they are now. My sister Lettitia came with us to pick pumpkins at a local church. I could see the fear in the volunteer's eyes when we showed up and kids kept pouring out of my car like clowns at the circus. He followed me round the whole time and I'm sure his blood pressure peeked while we were there. We wanted to take some pictures of the kids with their pumpkins but he had enlisted help to carry them to my car before I had a chance to put away my wallet.
Rebecca picked the tall pumpkin 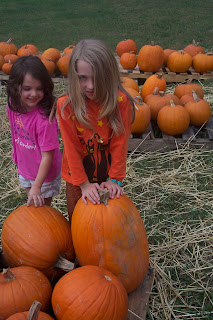 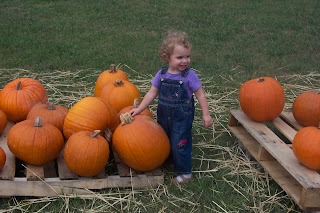 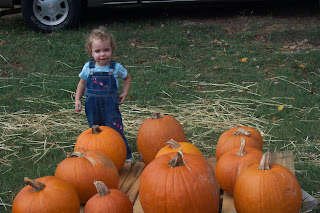 Elliott with his bitty one 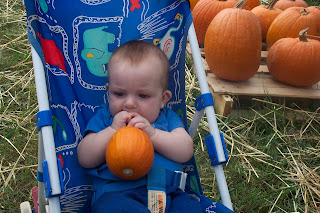 I'm not sure what Kendall was doing here
but as as usual she makes me laugh. 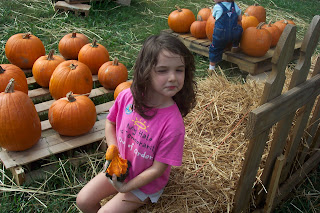 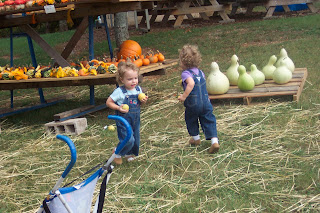 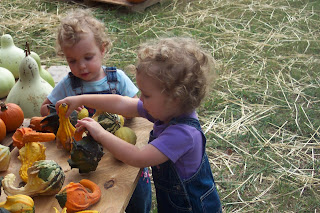 They had this cute little spot with a scarecrow that shouted "photo-op"
But before I turned around the man was at my car trying to load it in the back which of course had 2 or 3 strollers back there. lol
At least I got this shot. 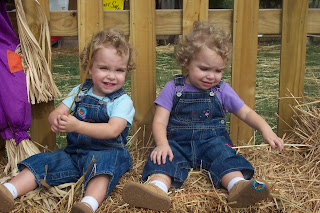 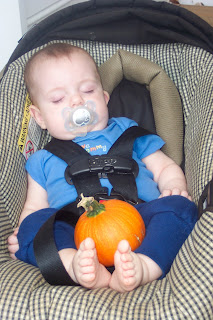 The problem with Georgia weather is that you almost have to carve your pumpkins the night before or else you end up with rotten pumpkins instead of Jack O Lanterns on Halloween. Well Matthew had to work and I was too scared to give my kids a carving tool so I ended up carving the pumpkins all by myself. I cut the tops off so they could clean them out. Then I tried to do the whole Survivor Man thing where I would carve and then try to get pictures making the process that much more tedious. Luckily only 1 of my kids wanted an intricate design.
Here they are cleaning out their pumpkins.
Notice Kendall is not touching that stuff and
Dakotta is tasting it. YUM-O 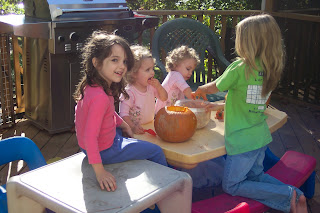 You can't really tell but Dakotta was actually taking the seeds out of the bowl
and putting them back into her pumpkin.
She's always been my hoarded. 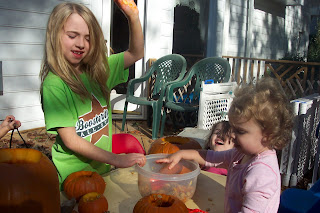 So I quickly got tired of documenting the process so
here they all are with their finished pumpkins. 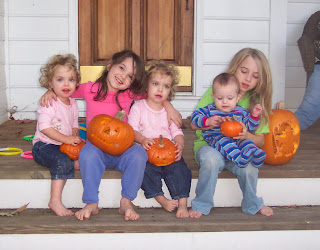 Rebecca's Witch with Elliott's bitty one 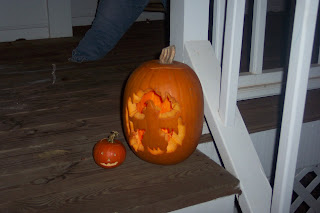 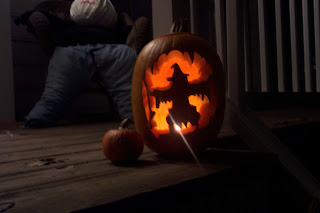 Kendall watched over my shoulder as she told me
exactly what to do for her "spooky" face. 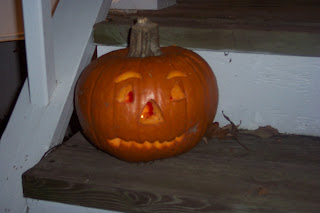 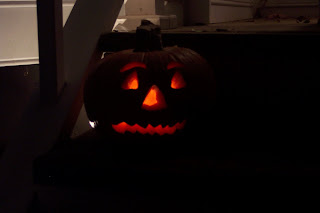 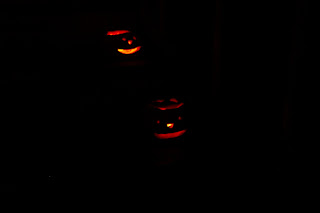 Trick or Treating was fun because this was the first year the twins really got into it. I couldn't really get a good group shot since they were so ready to fill up their bags. We live in a neighborhood with lots of hills and not only are the roads steep but we had to walk down a steep driveway just to walk up the 20some stairs to the front door and then back down the stairs and up the driveway to walk up the hill to the next house. And then on the other side of the street we did the opposite. And since our neighbor's mom had a nasty fall off some of these stairs just Sunday, I was paranoid and ended up carrying one twin up/down each set of stairs. But other than that it went really well and I figure it just gives me license to eat lots of their candy.
Rebecca was a Jack O Lantern Ghost
She got the idea when her uncle said she looked like a Jack O Lantern
with all her missing teeth. She's lost another one since yesterday. 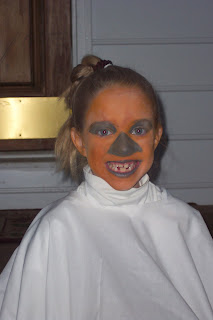 Kendall couldn't decide between a Witch or a Queen
so she settled on being "a stepmother."
My favorite moment of the night was when she was skipping along singing
and stopped and said to herself, "Wait I'm supposed to be EVIL." 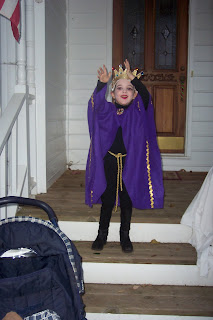 This is the best shot I got of Dakotta as Shirley Temple. 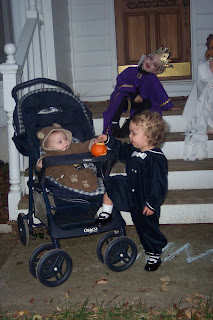 Rebecca and Kendall with Elliott the Teddy Bear 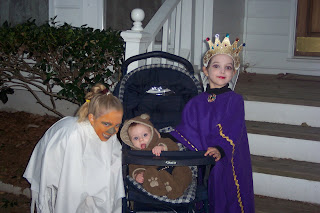 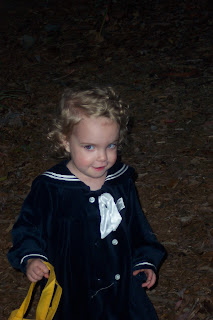 So today after lunch I got the twins their candy bags down so that they could pick a piece or 2 each to have for a treat. So Dakotta digs in her bag and pulls out a bag of Skittles and Corinna pulls out a long tootsie roll. I helped Dakotta with hers while Corinna unwrapped hers and then she tore it in half and handed the other half to her sister. And then Dakotta dumped out her bag of Skittles so they could share. When they were done with those I let them get another piece each. Dakotta reached in her bag for 2 packs of Smarties and Corinna got out 2 lollypops out of hers. I thought it was so sweet that it didn't even occur to me that they ended up actually with 3 pieces each until I was putting the bags up. Sneaky kids!
Stay Tuned: I hope to get some pumpkin pictures up soon.
Posted by Melissa at 10:13 PM No comments:
Newer Posts Older Posts Home
Subscribe to: Posts (Atom)