Me and My Shadow

Matthew's nickname for Elliott is "Shadow" because whenever Matthew walks in the room Elliott has to worm his way right over to him. He especially loves to watch his daddy building fires. Matthew will bring the wood in and the minute he opens that gate Elliott is right behind him watching everything he does. I worry that one day he's going to trip over him because the little guy is right under his feet. 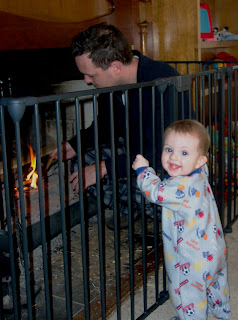 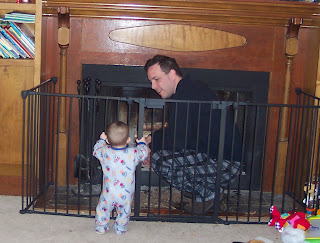 Posted by Melissa at 2:54 PM No comments:

The victim was hosting a holiday party when she realized that someone had broken into her bedroom. She found the drawer of her jewelry box on the floor with some of her jewelry missing. Then she found that the contents of one of her guests, a Ms. Kay Hiott, had been dumped out on the bed. All medications and credit cards were accounted for but her car keys were missing and there were teeth marks in her lipstick. Also a plastic green milk crate was placed next to the victims desk. It appears this was how the suspect gained entrance into the jewelry box. Ms. Hardin said she saw the suspect prior to incident walking around with the green crate which she uses to hold toys. Other witnesses say they saw Corinna walking around with large amounts of jewelry. It's not clear her level of involvement in the crime. But the pair have a history of these type of crimes.
Posted by Melissa at 7:25 PM 2 comments:

Saturday we loaded up the kids to get our Christmas tree. We went to Pike Nurseries because we've always had the best luck there for a decent price. They had a lady taking pictures of the kids by the trees and putting the pictures in card frames. At first she saw the twins with me and took their picture. Then she said, "Oh I didn't see the baby" and got one of Elliott. About the time she had it in the frame she realized there were 2 more kids. Then Kendall wanted hers by the flocked trees so I think we ended up coming home with 4 pictures. So I figure the least I could do is give them a good plug. 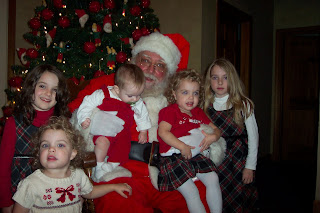 Sunday our neighborhood had cookies with Santa at the clubhouse. After church we quickly fed the kids and loaded them up. About the time Santa showed up Rebecca came to tell us her stomach hurt and she wanted to go home. We quickly got the picture with Santa and once I realized she wasn't going to hurl, I asked her to give the other kids a chance to have a treat. A few minutes later when it was time to go, she was mad we waited so long to leave, Kendall was upset that she didn't get to ask Santa how long it took him to get there and the twins were mad that they didn't get to play longer. This is the first event we've attended since we've lived here and I don't think Matthew or I got to have more than a 2 minute conversation with any of our neighbors. Maybe next year. 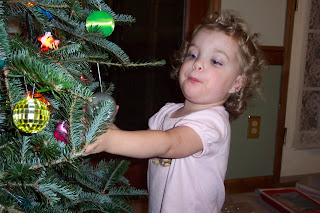 Later in the week the girls were talking about what they wanted to get from Santa. I jokingly told them that they were getting coal. Rebecca then explained that if you've been naughty all you get from Santa is socks, underwear and coal . Then Kendall said she was going to get Rebecca some coal for Christmas. When I asked her why and she said, "Well sometimes she's not nice to me BUT it is a ROCK!" 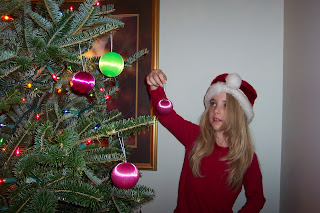 Well it took us a few days to actually get our tree up and decorated. First we had realized that we needed new lights and since I wasn't taking all the kids to the store it had to wait until Matthew got off work. Then once I got the ornaments out within minutes one was broken and Elliot went straight for it. So the next day I packed up the 3 little ones and made a run to Target. Thanks to a few boxes of raisins, a package of animal crackers, a double stroller and a sling, I was able get the only set of multicolored shatterproof ornaments they had without any major meltdowns from the little ones. After making the kids wait half a week they had fun decorating the tree all of 10 minutes before they decided it was more fun to play with the ornaments. 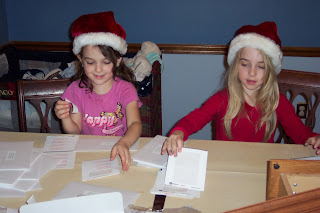 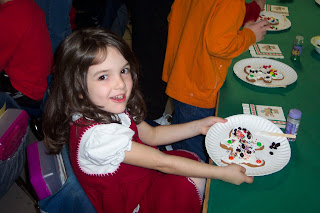 Today Meme and Papa Hardin came over to watch the three little kids so that I could go to Kendall's Kindergarten class and help her decorate a ginger bread girl. After she was done she ate her ginger bread cookie's arms and legs off. Kendall said she wanted to make sure she didn't try to run away. After that we wrote a story about her ginger bread girl who she named "Bristol" and caused quite a bit of trouble at school. (Sounds awfully familiar). Kendall was especially excited that I finally got to meet her friend Charlie who she talks about all the time. Then they ended the day by singing a few Christmas songs. Kendall took a few minutes to warm up. I was worried about this part since a few weeks ago she totally froze up when she was supposed to give the scripture and prayer in Primary (children's Sunday school). But she did great! 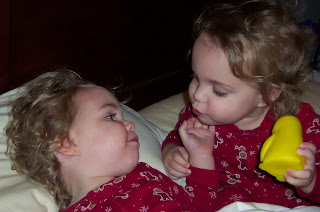 The other night Corinna woke up very upset in the middle of the night. I went in to calm her down but the normal stuff didn't work. She kept saying she wanted to go downstairs. So I finally made sure Dakotta went back to sleep and brought Corinna to bed with us.

Well 6:00 Dakotta wakes up crying and I could tell she was upset and realized that she was all alone. I go to check on her and she's in Corinna's bed bawling. I explain to her that Corinna is in my room and we'll go see her. In the meantime Elliott is in his bed (also in our room) crying and soaking wet. So I tried changing him while Dakotta clung to my leg in the semi dark. I kept telling her Corinna was in the bed but she wouldn't leave my side. I even set her on the bed hoping she'd find Corinna while I finished changing Elliott. Well she eventually woke up Corinna but would not move to go to her. So Matthew finally asked Corinna to talk to Dakotta. Corinna crawled over and put her head on Dakotta's lap and gave her a little hug then Dakotta's whole face lit up and she gave her the biggest hug. It was if she was trying to say, "Don't ever do that again."

I think I felt my heart melt a little at that moment.
Posted by Melissa at 10:24 PM 2 comments:

That's about the way it rolls around here.

So this year I decided to try my hand at taking my own Christmas photo. I bought some coordinating pj's and made my bed (not an every day occurrence around here) and tried to get some pictures of my 5 children. Well as is always the case one of my kids just can't get with the program. It started out being Dakotta, she wasn't being disagreeable, it's just that every time I went to take a picture she had to jump or put something in her face. About the time I got her to cooperate Elliott decided that he had enough of this nonsense and cried every time I put him near his sisters. One of the things I've learned in the past 3 years is to let things go (if you've seen my housekeeping skills you'd agree) so I called off our little photo shoot.

When I finally got around to uploading my pictures I thought I had some really cute shots but was a little disappointed that I didn't get that one "perfect" pose of all 5 of my kids. Part of me was tempted to get them all dressed again and try again. But I decided that anyone who knows us knows we are far from perfect and I'm not trying to sell picture frames after all.
Posted by Melissa at 10:30 PM 2 comments:
Newer Posts Older Posts Home
Subscribe to: Posts (Atom)