Objective: Get home with all the items on your grocery list, preferably unopened and in one piece.

Players: You, 1 set of 3 year old twins and a 1 year old. (Do not let them convince you that they are your team mates, they have their own objectives).

What you need to play: one grocery cart with a plastic car attached to the front. Since you have 3 kids you will need the ones with 2 seats in the car and 2 seats in the basket. If your area is like mine their is probably only one store that has this cart and will require you to pay a membership to shop there. Once you've found a store that carries this cart you may need to circle the parking lot multiple times to actually find one in a cart corral. If that doesn't work, watch the front door and stalk any carts that come out. Then try to discretely park near this other mom and offer to take her cart for her. If she mentions how popular they are try not to mention that they are the only cart you can use for your 3 children. You especially shouldn't do this while giving her and her 5 year old laser beam glares because the child wasn't even IN the cart. Now once you've procured the cart, if you find them without any functioning belt buckles consider yourself elevated to the EXPERT level of the game.

How to play: Take your list and begin to navigate your way through the store selecting your items. Every 3 minutes you must stop and have all the children with you rotate positions. Possible positions include, the 2 seats in the car, the 2 seats by the handle, in the basket of the cart, your 2 hips, or walking beside you (since your 1 year old is not walking this will not be an option for him). You must stop at any sample stations. You must answer the questions, "Are they twins?" "Are they identical?" "Are they all yours?" pleasantly without letting on that the inquirer is not the first person to ask you. You are not required to stop when someone says, "You've got your hands full" but should smile and nod.

Bonus Round: You may bypass the bonus round by getting in the cashier line. If you wish to play this round you must use the self scan line while keeping an eye on all the children.

Now that you know the rules, who wants to play?
Posted by Melissa at 10:38 PM 5 comments:

Papa Hardin has been working diligently on the playhouse for the girls so I thought I would post some more recent pictures. The girls are already loving it they've moved some table and chairs in there for tea parties and such. I think they enjoy having Papa Hardin more. I think they'll be a little sad when he finishes because he won't be coming over as often. I guess they'll have to invite him for tea. 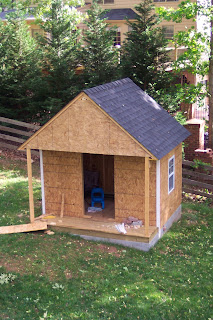 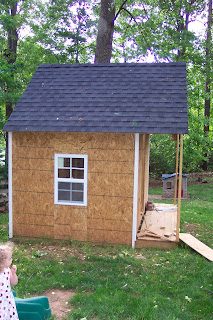 An in addition to the playhouse, he and Meme gave the kids a set of Monkey bars that attached to the swing set they got for Christmas. 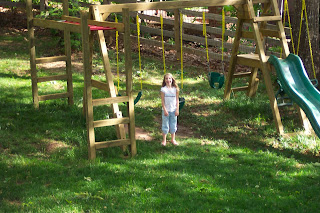 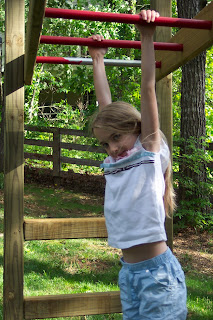 My goal is to make my backyard more fun than inside so that they only want to come in to sleep.
Posted by Melissa at 10:48 PM 2 comments:

This morning while getting ready for school Kendall, Rebecca and I had an interesting discussion on economics. Matthew had been up most the night working from home. Some of the things he does have to be done at their client's least busy times, which usually means about 3am. Well because he got to bed so late he wasn't going to be able to take the girls to the bus stop like he usually does. First they wanted to know if he was staying home the whole day. I said he'd probably go in to work after lunch. Then Rebecca wanted to know if he still got paid for the full day. I assured her he would because he could count the hours in the middle of the night he worked.

Then Kendall wanted asked what he did. They know one of his company's biggest clients are Hasbro Toys so I used them as the example. Telling them that if people wanted to buy toys that DH writes the programs so they can go to Hasbro's website to buy stuff (actually DH doesn't do this for Hasbro but it was more for illustration purposes and I knew that would sound cooler than saying he wrote programs for the American Medical Association). I explained that people picked the items they wanted out online, paid with a credit card and then the people at daddy's office shipped the items to the customer. Thanks to Webkinz they seemed pretty familiar with the concept of an online shopping cart. Then Kendall's eyes lit up and said, "So the more things people buy, the more money daddy makes." I didn't have the heart to tell her that the more things people buy the more money daddy's company makes. Rebecca wanted to know if all the money went to the toy store or if the credit card company got any of it. I explained that the toy company probably paid the credit card company a small fee, like around $3 for every $100. Then Rebecca began to explain to Kendall that they take the money from your credit card but you have to pay the credit card for it and if you didn't pay for it all one time you'd have to pay EXTRA.

I tell you it was conversation to make their frugal mother proud. Next thing I know they'll be asking about 401Ks and mutual funds.
Posted by Melissa at 10:44 AM 2 comments:

Granny Lives in a Circle

My mom lives in a town called Social Circle. The other day I was busy and I heard the following conversation.

I didn't get it at first but my mom finally put the pieces together for me. We've had the different variations of the same conversation a lot this past week. Apparently the play house is a triangle house. Today, Dakotta said she wanted to live in a circle with Granny. I hope she's not disappointed the next time we go to visit her when she realizes the house is just another square house.
Posted by Melissa at 4:34 PM 2 comments:

The Friends in My Computer

This past weekend Matthew and I had a chance to go to Charleston, South Carolina to meet some friends from a twins message board I've been on for almost 3 years. As someone else noted, it really is a weird feeling to walk into a room of "strangers" and know their life stories. They really are an amazing group of people and have really been my sanity in the past few years. The thing about being a mom of multiples is that it in the early years it can really be quite isolating. It really is very hard to get out and do the things that people with 1 kid or kids spaced out better can do. But if you know me you know how I crave interaction and preferably some of that needs to be adult conversation. At first I joined to read about how they dealt with bed rest, nursing twins, getting them on the same schedule and things like that. Eventually my needs changed and we discuss things like religion, global warming and what should I cook for dinner. They've celebrated my kids milestones and cried with me through my trials. They've kept me engaged in what's going on in the world and given me a release when things were too much in my own little world.

Poor Matthew wasn't quite sure what he was getting into when he agreed to go. But he wasn't so sure about letting me go alone either. And we both really needed some time away from kids and work. He's always been very supportive of me and in fact was the one who finally convinced me it was ok to actually post instead of lurking on their discussions. I think he realized that they were a great resource but I don't think he really understood the magnitude of these friendships until this weekend.

Now when I told people we were meeting a bunch of twins parents I think they thought it would some sort of conference with seminars on parenting twins. But it really was just a chance to not be "parents" for a weekend. We hung out on the beach, played games, toured Charleston, did some shopping, lots of eating and basically just enjoying each other's company. And really we spent very little time talking about kids. Matthew and I both pointed out how simple chores like doing dishes and taking out trash didn't seem like work when we didn't have kids climbing on us or whining at us while we did it (and it helped that someone else cooked the meal). It was just so great to be Melissa for a few days and not Mom. Matthew and I didn't even spend that much alone time together but I think he enjoyed seeing me be myself for a few days and not just the mother of his children.

That's not to say I didn't miss my kids. I had been so worried about leaving them and how best to do that. 5 kids seemed too much for my mom but I'm not sure I wanted to split them up either. I finally decided to leave my mom with the girls and Elliott got to go hang out with his cousins at Stephen and Shelene's house. And despite all but Kendall getting sick while I was gone, they seemed to have survived and hopefully there's no permanent damage. In the end I came home with some even greater friendships, a renewed energy and calmness to deal with my kids and a little more in love with my husband than before. What more could one ask for from a vacation?
Posted by Melissa at 9:44 AM 3 comments:
Newer Posts Older Posts Home
Subscribe to: Posts (Atom)