My kids love Ritz crackers. We buy them in bulk and go through them pretty quickly. They call them circle crackers. Well Ritz are fine if you want some cheese or peanut butter on them but for soups I prefer the good old saltines. Tonight I opened a pack of saltines and the twins seemed really intrigued by these "new" crackers and, as they tend to do, they kept asking "What's this?" And as is often the case, I go through different answers of the same question. "A cracker" "A saltine" " A square cracker" So then Corinna asks me for the twelfth time "What's this?" and before I can answer she sings "Sponge Bob Square Cwackwer?"
Posted by Melissa at 8:08 PM 1 comment:

We had just put the twins to bed when our neighbor called to tell us our chimney was on fire. I immediately yelled at the big girls,who were downstairs, that there was a fire and to get out while I was grabbing the twins out of their beds. Rebecca had been watching Elliott in the living room but we've always told her just to get herself out of the house so it took me a few seconds to find him. I had dropped the twins on the front porch to go get him and when I got out the door my girls were running to the meeting spot just like we've talked about. The fire alarm went off right as I was walking out the door and that was just about the time I first smelled smoke.

I had grabbed one blanket for Elliott and the twins were in thick pjs but poor Kendall was in short sleeves and no shoes. Luckily my neighbor came and we all headed back to her house.

DH was on the phone with 911 as I was leaving (he was also looking for pants because he had just taken off his work pants when the neighbor called). Then he grabbed our 2 fire extinguishers and used both of them to put the fire out in the fireplace.

The twins and Elliott thought it was exciting, Rebecca cried that she didn't want kitty cat blankie and lambie to burn, Kendall cried about something or other. I kept telling them it was just the chimney and the important thing was that we were all safe. Then we watched from my neighbors house as 4 fire trucks, an ambulance, and the fire chief come blaring up to my house. There were no flames at this point. (Of course I now realize that my house is a total disaster from a very crazy weekend and now not only was the whole fire department running through it but now neighbors were stopping to check on things).

A little bit later DH called us with the all clear. The house is a little smoky but it's more of a weird chemical smell from the fire extinguishers. We've had as many windows open as we could. Luckily the little ones went to bed pretty quickly. Kendall's sleeping on the sofa down here at the moment but I suspect it could be a long night with the big girls.

It was really scary but I keep telling them that they did everything right so that everyone is safe. I'm so grateful that our school has a fire safety week because both girls had homework this past fall where we had to talk and practice all these things. When we were doing this back then I realized that we hadn't picked a new spot since we moved here. So I'm glad that we were prepared and I'm so proud that my girls did everything that we'd talked about.

And while I feel blessed that things turned out fine I'm sitting here still shaking and sick to my stomach because it's things like this that the reality of having 5 people so completely dependent on us is just so overwhelming.

PS. Check you smoke alarms and go over your fire plan with your kids.
Posted by Melissa at 11:38 PM 3 comments:

So today I actually resorted to vacuuming my children. In the past few days they've figured out how to get into the basement. That wouldn't be so bad because there's a playroom down there, but it's also where I keep my scrapbooking and stamping supplies. I discovered them in my stuff and ordered them to put back a jar of glitter and herded them back upstairs. Well apparently the sneaky little team smuggled it upstairs without me seeing their slight of hand. (Things like this make me question if the concept of teamwork is as great as the Wonder Pets make it out to be). A few minutes pass and I go to check on them and see them and my living room sparkling like the ruby slippers.

Well this wasn't your basic craft glitter but my good (expensive) stamp glitter which is very fine. A while back one of my older girls had opened the jar and just the little bit that she got out was all over Elliott's swing; for months my poor boy would sparkle in the right light. So I immediately grabbed my new vacuum cleaner and was actually pretty impressed with how well it did getting up the mess and I looked up and my girls were watching me all covered in glitter. That's when I decided to give the vacuum a try on them. I used the brush attachment and it actually did a pretty good job. Unfortunately they really got a kick out of it so I hope it isn't an incentive for them to get into more messes.
Posted by Melissa at 7:14 PM 1 comment:

Papa Hardin has been planning this play house for years. Once we signed the papers for this house he started building it in his basement. Well we've had other things come up (like a baby) so we are just now finally getting it put up . He's been here almost every day we've had nice weather and even showed up as soon as the sun came out after the recent tornadoes. And he does all this with not only our kids but many of the neighborhood kids running around him; he doesn't even get mad when his tools decide to play hide and seek. My kids are so excited. My kids sure are blessed to have such a patient and generous Papa. Here are some picture of the progress from the last week. (Oh Matthew helped some too). 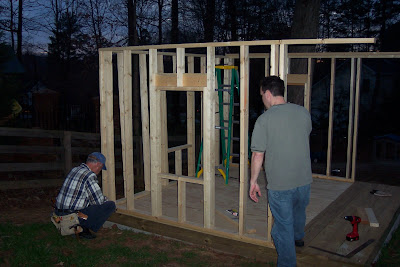 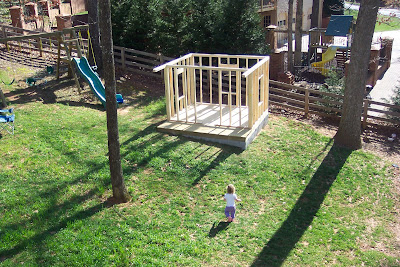 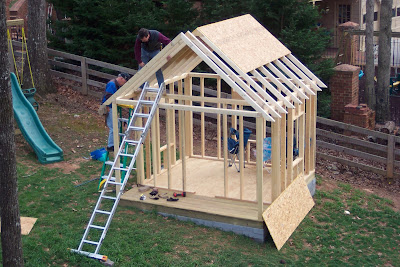 Bowl of Fruit by Nibble and Peck 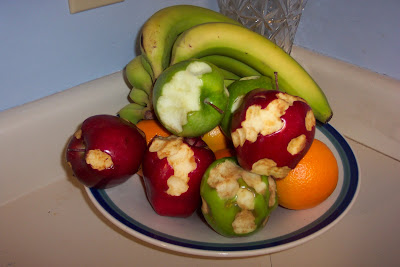 This is what happens when I leave the twins in the kitchen unattended. They were coloring when I left them but they took my absence as an opportunity to help themselves to a snack. I found one and since it only had a few bites taken out of it I put it back in the bowl. I figured we'd just cut off the bad parts (yes, I'm aware I'm cheap and proud of it). Then I realized that this morning I had a bunch of apples so I had to go find the rest of their stash. Rebecca was not happy when she got home from school but she was a good sport. And unlike her sisters she ate not only the rest of the one of the apples, but also the core, the only thing left was the stem and the seed. I guess I should be glad my kids like fruit.
Posted by Melissa at 10:15 PM 1 comment:
Newer Posts Older Posts Home
Subscribe to: Posts (Atom)